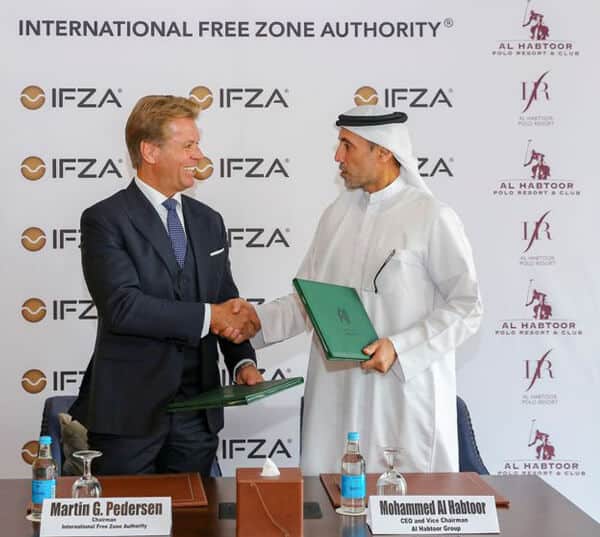 The sponsorship deal covers IFZA’s presence at the Club during several well-awaited tournaments such as the UAE National Day Cup 2021, the Sir Winston Churchill Cup 2021, a series of AHPRC Leagues and the Dubai Polo Gold Cup Series 2022.

Present at the signing ceremony were Mohammed Khalaf Al Habtoor, Vice Chairman and CEO of Al Habtoor Group and IFZA Chairman Martin G. Pedersen. Alongside the sponsorship deal, IFZA will have several hospitality events at the Al Habtoor Polo Resort hotel during the season.

Answering Your Questions About Business Setup in Dubai

Learn about business setup in Dubai with IFZA. We answer all your questions regarding company formation and incorporation, and our business setup services. Explore more.

Looking for the perfect office setup in Dubai? Read this article to learn how to choose a workspace for rent and discover IFZA's modern office solutions.

The amazing IFZA Residence Visa Free For Life offer continues this September with a world of great benefits, including free medical insurance!

DUBAI, 26th July, 2022 (WAM) -- IFZA Dubai has entered into a partnership agreement with the Commercial Bank of Dubai (CBD) to provide IFZA Free Zone companies with quick and convenient access to banking services and financial solutions. Through this partnership, the free zone companies will be able to conveniently and efficiently open special corporate bank accounts as well as obtain personalised services through dedicated onsite CBD relationship managers, starting July 2022.

For small businesses to thrive, they require an environment that is conducive for growth” – Nydia Velazquez. The Grow Initiative is an important platform for IFZA to not only show its commitment to environmental sustainability, but also to motivate the members of the IFZA Community to consider the impact of their business on the natural ecosystem that they are a part of.

The micro, small and medium enterprises (MSME) sector is an important driver of growth for the United Arab Emirates (UAE). Consider the following facts from the UAE Ministry of Economy:

Inclusion in the Workplace

IFZA Dubai, the dynamic and internationally oriented Free Zone in the United Arab Emirates (UAE), today announced the launch of an exclusive health insurance service for IFZA Free Zone Companies under the umbrella of the IFZA Life division.

IFZA Dubai, the dynamic and internationally oriented Free Zone in the United Arab Emirates (UAE), today announced the launch of an exclusive health insurance service for IFZA Free Zone Companies under the umbrella of the IFZA Life division.

When working in the UAE, you have several options, but how do you know if you are choosing the right one? Whether from the perspective of an employee or an entrepreneur, it is always a big decision because you need to ensure that the policy you choose will cover your individual priorities.

THE BENEFITS OF RENEWING YOUR IFZA FREE ZONE BUSINESS LICENSE

William Shakespeare may have said that "A rose by any other name would smell as sweet" but in the business world, your business identity is one of your most valuable assets. Keeping your existing IFZA Free Zone Business License is more important than you think. Here are a few reasons why...

DEDICATED TO EXCELLENCE IN BUSINESS & BEYOND

In 2021, the UAE government laid out the UAE Centennial Plan 2071, which is based on the pillars of future-focused government, excellent education, a diversified knowledge economy, and a happy and cohesive society. IFZA has strategically positioned itself to contribute to all four pillars.

IFZA is known for our relentless striving for excellence in everything we do. The key to our continuing success lies in our unfaltering commitment to providing 3 fundamental things.

This entire Ramadan season, IFZA underlines its ongoing support for businesses in the SME sector in a one-off deal where investors with IFZA Free Zone Licenses can avail a 100% waiver on Late Business License Renewal Fines.

LESSONS FROM THE WORLD’S GREATEST SHOW

As the gates of Expo 2020 Dubai closed for the final time, Dubai celebrated the end of 182 days of hosting global leaders, businesses, and visitors from hundreds of countries around the world.

Before you take the first step of formally incorporating your business, consider these five things when it comes to formally starting your own company.

WHY YOU SHOULD CONSIDER COMPANY FORMATION IN DUBAI

The amazing IFZA Residence Visa free for life offer stays this February with a world of great benefits!

IFZA ACADEMY: BUILDING THE KNOWLEDGE BASE OF THE INDUSTRY

The IFZA Academy creates a culture of knowledge, growth and development that extends from within the IFZA organization out to our Professional Partners and the wider Free Zone Industry.

THE TRUE MEANING OF IFZA PARTNERSHIP

Words such as “collaboration”, “partnering” and “leverage” are words often used in business. Collaborate is to join forces, to make something better or stronger than it was before. The age-old adage that everyone needs to play to their strengths really works. That’s the point of collaborating.

Dear IFZA Professional Partner, As this memorable year comes to a close, I want to say thank you for your loyalty to IFZA.

WHAT THE SHIFTING OF THE NEW WORK WEEK MEANS FOR BUSINESSES

The UAE has taken a number of significant steps in recent times to raise the quality of the business environment.

The UAE has taken a number of significant steps in recent times to raise the quality of the business environment.

Develop a business ecosystem that delivers greater value to our clients

How have UAE free zones evolved into a catalyst for the business community and start-ups in the past 50 years?

Free Zones take on many of the burdens new small business owners experience, especially when setting up in a foreign country.

The competition is in search of compelling business ideas that can also impact the community or the environment positively.

What Makes A Successful Free Zone?

Today, design for purpose is a perfect marriage between bespoke and accommodating a wider audience.

Megatrends are powerful, transformative forces that change the way we do business and we have seen a rapid acceleration of a number of megatrends over the recent months.

Putting People First in the Pursuit of Opportunity and Excellence

We are relentless in our efforts to develop a positive experience with every person that we interact with, using tools and technologies that facilitate doing business with people and for people.

Explore Dubai's most sought-after benefits to individuals and businesses to set up shop in.

IFZA Dubai, one of the most dynamic Free Zones in the UAE, and Nikon Middle East and Africa...

IFZA Dubai shares what sets it apart by offering so much more than a Free Zone...

DUBAI 2040 MASTER PLAN: SETTING A GREATER VISION OF THE FUTURE

Over the last 60 years, the growth of the Emirate of Dubai has been outlined by a series of ambitious plans called the Dubai Urban Master Plan...

Alongside our commitment to providing world class services to our Partners and Licensees, our team at IFZA are equally committed to...

The International Free Zone Authority (IFZA), one of the most dynamic Free Zones in the UAE, and Nikon Middle East and Africa, one of the world’s foremost optics...

STAY ON TOP OF YOUR BUSINESS GAME

The growth of Free Zones such as IFZA has made company formation in Dubai easier than it used to be, however incorporating your business is one thing...

WHY SET UP YOUR BUSINESS WITH IFZA?

Strategically placed at the crossroads of major markets, Dubai has emerged as among the top choices to do business not only in the Middle East, but also in the world...

High-profile event aimed to serve as catalyst to forge business partnerships The International Free Zone Authority (Ifza) has signed an agreement with the...

What is the significance of IFZA’s move to Dubai? IFZA Dubai continues to be the only B2B-focused Free Zone in the UAE and our partners remain...

At IFZA we have ensured that our existing license holders are well looked after during the exciting phase ahead for their company. IFZA clients will be able to take...

As your single point of contact for all Free Zone business formation and administration services, we at IFZA Dubai are committed to providing a safe and business...

The agreement lays the groundwork for a strategic cooperation between IFZA and DSOA Dubai-UAE: 21 October 2020 – Dubai Silicon Oasis Authority (DSOA...

BIZ FOR GOOD – A PITCH VLOG COMPETITION powered by IFZA in collaboration with Nikon ME, Rove Hotels and letswork

ENTRY IS FREE. NO PURCHASE OR PAYMENT IS REQUIRED TO ENTER OR WIN. ENTRANTS MUST BE AT LEAST 21 YEARS OF AGE AT TIME OF ENTRY. THIS CONTEST IS INTENDED FOR PARTICIPATION IN THE UNITED ARAB EMIRATES (UAE) ONLY AND WILL BE GOVERNED BY APPLICABLE UAE LAWS.

If a potential winner does not respond and comply with the instructions within 2  days, or if the data reveals that the video does not comply with these Official Rules, the Entrant will not be eligible to receive the prize and an alternative winner will be selected.

The prize does not include other costs payable in relation to the winner’s establishment card, any status change fees, or the costs for medical tests and issuance of Emirates ID Card. The prize also does not include costs and processes related to securing third party government approval, should it be required based on the winner’s proposed business activities.

IMPORTANT: IFZA has no responsibility for a winner’s inability or failure to accept or utilize a prize as described herein. The prize is non-transferable nor convertible to cash. If a potential winner is found to be ineligible, is not in compliance with these Competition Rules, does not respond to the email in a timely manner, is disqualified or forfeits prize for any reason, or declines to accept the prize, IFZA reserves the right to award the prize to an alternate entrant who will also be selected per the judging criteria from all remaining non-winning entries received during the Competition Period.

Hello. Please let us know how we can be of assistance and a member of our team will get back to you shortly.